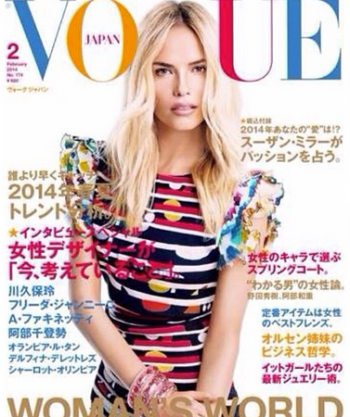 Privet Matryoshka’s!! The Russian model recently made the cover for Vogue China’s January 2014 issue, and now she’s going to be on the cover of Vogue Japan’s February 2014 issue (By Patrick Demarchelier).

Natasha put up this sneak peak of herself on the Cover for Vogue Japan on instagram. The models been getting a colourful head start to the 2014 year, and with the glimpse of this cover I’m guessing it has to be an indicator that the model will be wearing some crazy colourful outfits. (& Hopefully something romantic since February = Saint Valentine’s Day)

I don’t have any more photo’s for Japan’s February issue to show, so as a consolation here is one more photo Of Natasha Poly in the latest issue from Vogue China.